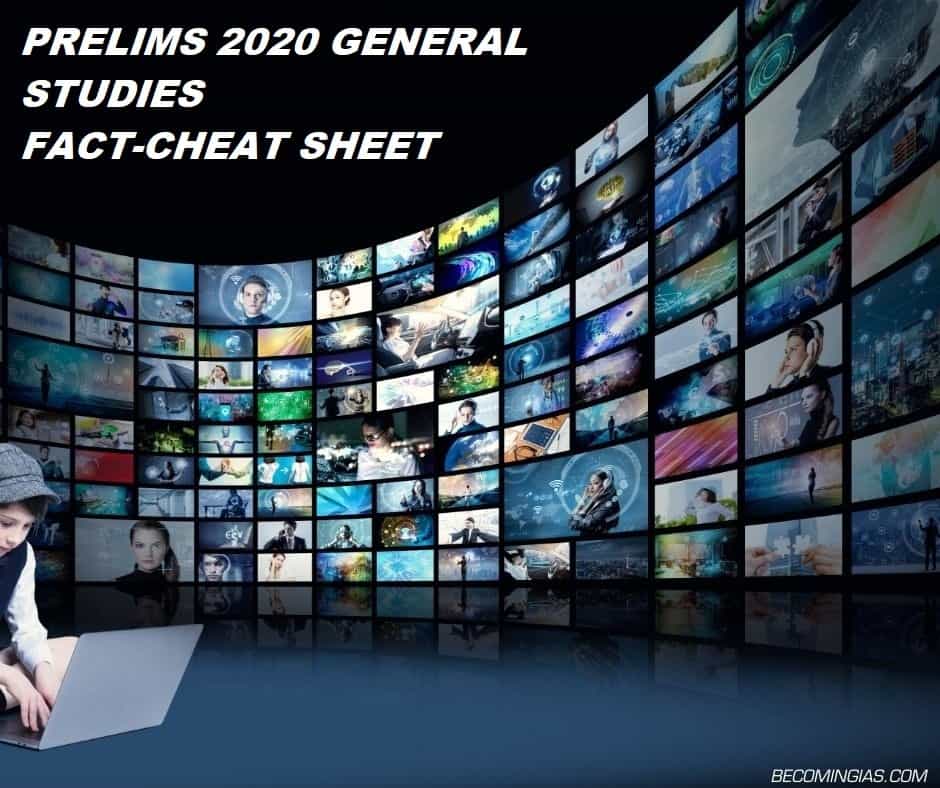 With the Prelims approaching fast, I know you feel anxious and nervous about your GS Score .There is always doubt if you have done enough and if you will make the cut-off or not.

Often, the difference between those who clear the Prelims and those who don’t is just a few marks here and there. With only a few days left, can you tilt this narrow margin in your favor?

The purpose of this fact-sheet is to boost your GS Score in the upcoming Prelims, hopefully enough to get you across the cut-off. This does not mean that this Fact-Cheat sheet will be enough. Far from it. However, it means that once you have done all the essential hard work of preparation, it can help you get those few marks which will take you across the GS score cut-off.

Why is this called the Prelims Fact-cheat ?

Because one, anything which gets you an advantage over your competition WITHOUT much laborious effort is called a hack or a cheat code. Every examination has weaknesses and your job is to find out what those are and exploit them to the hilt.

Two, The UPSC exam has certain specific weaknesses which can be used to your advantage if you know what they are. One of them is that the UPSC is bound to ask you questions which are relevant and current- in both Prelims and Mains but more so in Prelims.

This goes beyond just ”Current Affairs”. It means that the UPSC wants to test your overall awareness of not just the events which occur in the world, but the impact of those events.

In fact many times, the questions in Prelims emanate from the indirect impact of a current event instead of asking about the event directly.

We are witnessing a Mega-event as far as human history is concerned in the form of the Covid-19 pandemic. The pandemic is an event of such magnitude that it can hardly be realized at the present moment. it will become clearer as we go ahead in time and look back to realize that one fine day, a virus held humanity helplessly hostage and killed millions while we straggled and locked ourselves in clinging on to dear life.

You can expect the questions about the Covid-19 Mega event not be direct but about the implications it has had across the board. This is the reason that this Prelims cheat-sheet explicitly includes and explains the impact.

Third, the UPSC is bound to ask you questions from official government-recognized sources. This becomes obvious when you consider the fact that the UPSC is a constitutional, government organ which is tasked with recruitment for the executive branch of the Indian Government. From start to finish, all of this is OFFICIAL and recognised. This essentially means that the UPSC can never ask questions in the Prelims or Mains exam from spurious or unauthentic sources.

You can read about the IAS score booster Fact-Cheet Sheet and official sources here.

Once you know this and realize it’s powerful ramifications, you will be able to narrow down your sources of information.

Fourth, information which is visually presented is remembered more efficiently and is therefore, easier to recall.

You will find that this Fact-cheet sheet has taken care of all the above factors to a large extent.

This Fact-Cheat covers the effects of the Covid-19 pandemic which makes it highly relevant from the point of view of General studies and the upcoming Prelims exam.

Do not be surprised if you find some direct questions in the Prelims from this fact-cheat sheet.

You can simply save the infographics on your phone or laptop and look at them every time to time, which will serve as good revision for the upcoming Prelims.

The 2030 Agenda for Sustainable Development, adopted by all United Nations Member States in 2015, provides a shared blueprint for peace and prosperity for people and the planet, now and into the future. At its heart are the 17 Sustainable Development Goals (SDGs), which are an urgent call for action by all countries – developed and developing – in a global partnership. They recognize that ending poverty and other deprivations must go hand-in-hand with strategies that improve health and education, reduce inequality, and spur economic growth – all while tackling climate change and working to preserve our oceans and forests.

The SDGs build on decades of work by countries and the UN, including the UN Department of Economic and Social Affairs

Today, the Division for Sustainable Development Goals (DSDG) in the United Nations Department of Economic and Social Affairs (UNDESA) provides substantive support and capacity-building for the SDGs and their related thematic issues, including water, energy, climate, oceans, urbanization, transport, science and technology, the Global Sustainable Development Report (GSDR), partnerships and Small Island Developing States. DSDG plays a key role in the evaluation of UN systemwide implementation of the 2030 Agenda and on advocacy and outreach activities relating to the SDGs. In order to make the 2030 Agenda a reality, broad ownership of the SDGs must translate into a strong commitment by all stakeholders to implement the global goals. DSDG aims to help facilitate this engagement.

The Government of India is strongly committed to the 2030 Agenda, including the SDGs, as evidenced by the statements of the Prime Minister and other senior Ministers at national and international meetings. India’s national development goals and its “sab ka saath, sab ka vikas” or “development with all, and for all,” policy initiatives for inclusive development converge well with the SDGs, and India will play a leading role in determining the success of the SDGs, globally.   As Prime Minister Narendra Modi noted, “These goals reflect our evolving understanding of the social, economic and environmental linkages that define our lives.”.

National Action on the SDGs in India

NITI Aayog, the Government of India’s premier think tank, has been entrusted with the task of coordinating the SDGs. NITI Aayog has undertaken a mapping of schemes as they relate to the SDGs and their targets, and has identified lead and supporting ministries for each target. They have adopted a government-wide approach to sustainable development, emphasising the interconnected nature of the SDGs across economic, social and environmental pillars. States have been advised to undertake a similar mapping of their schemes, including centrally sponsored schemes.

In addition, the Ministry of Statistics and Programme Implementation (MoSPI) has been leading discussions for developing national indicators for the SDGs. State governments are key to India’s progress on the SDG Agenda and several of them have already initiated action on implementing the SDGs.

State governments are key to India’s progress on the SDG Agenda as they are best placed to ‘put people first’ and to ensuring that ‘no one is left behind’. Many of the Government’s flagship programmes such as Swachh Bharat, Make in India, Skill India, and Digital India are at the core of the SDGs. State and local governments play a pivotal role in many of these programmes.

The role of local governments is equally important; 15 of the 17 SDGs directly relate to activities undertaken by local governments in the country. State governments are paying keen attention to visioning, planning, budgeting, and developing implementation and monitoring systems for the SDGs.

Advocating the broad-based consultative process that characterizes the new global agenda process, the United Nations in India supported the participation of civil society organizations, think tanks and the Indian media in discussions at intergovernmental negotiations, seminars on financing for development and sustainable development and side sessions at the International Conference on Financing for Development at Addis Ababa and during the General Assembly in New York.

The UN Country Team in India supports NITI Aayog in its efforts to address the interconnectedness of the goals, to ensure that no one is left behind and to advocate for adequate financing to achieve the SDGs. In close collaboration with NITI Aayog and partners, the UN has supported thematic consultations on the SDGs to bring together various state governments, central ministries, civil society organizations and academia to deliberate on specific SDGs.

The UN in India currently supports state governments in localizing the SDGs to address key development challenges at the state level.

Global reduction in extreme poverty was driven mainly by Asia – notably China and India. Between 2005-06 and 2015-16, the incidence of multidimensional poverty in India was almost halved, climbing down to 27.5 percent from 54.7 percent as per the 2018 global Multidimensional Poverty Index report. Within ten years, the number of poor people in India fell by more than 271 million (from 635 million to 364 million). Traditionally disadvantaged subgroups such as rural dwellers, scheduled castes and tribes, Muslims, and young children are still the poorest in 2015-16. However, the biggest reductions in multidimensional poverty has been witnessed among the poorest and traditionally disadvantaged groups – across states, castes, religions and age-groups. Multidimensional poverty among children under 10 has fallen the fastest. In 2005-06 there were 292 million poor children in India, so the latest figures represent a 47 percent decrease or a 136 million fewer children growing up in multidimensional poverty. The Government of India has many progressive schemes, including the world’s largest employment guarantee scheme, the Mahatma Gandhi National Rural Employment Guarantee Scheme, and the National Social Assistance Programme.

South Asia still faces one of the greatest hunger burden, with over 15% of the population considered undernourished. How we grow and consume our food has a significant impact on levels of hunger, but it doesn’t end there. If done right, agriculture and forests can become sources of decent incomes for the global population, the engines of rural development, and our vanguard against climate change. The agricultural sector accounts for about 40% of the total employment in India. However, the agricultural, forestry and fishing sectors contribute only 15.5% to GDP value added. The Government of India has prioritised strengthening agriculture through measures in irrigation, crop insurance, and improved varieties. The government has also taken critical steps to enhance food security, including through an India-wide targeted public distribution system, a National Nutrition Mission and the National Food Security Act. The Rashtriya Krishi Vikas Yojana, the National Mission on Sustainable Agriculture and many national schemes on horticulture, agricultural technology and livestock are leading the way in improving India’s agriculture.